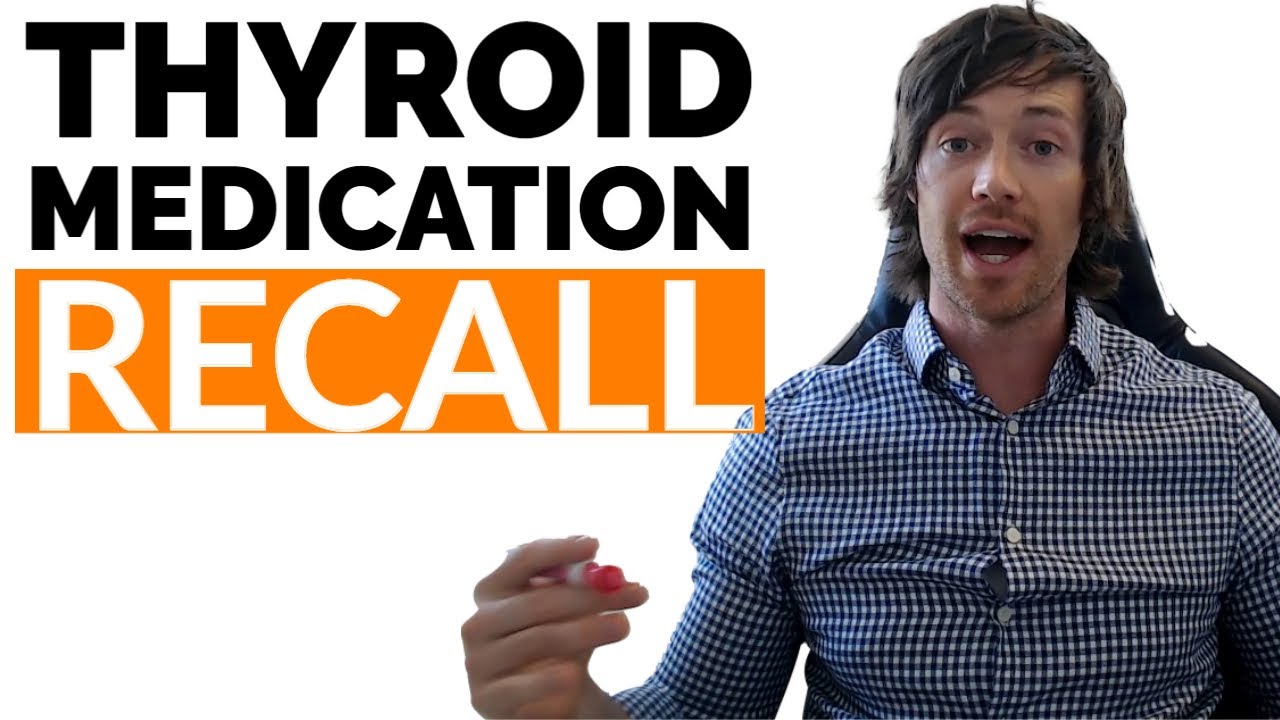 2020 Has Been a Rough Year For Thyroid Patients

2020 has been a rough year for everyone but especially for thyroid patients!

We've had to deal with several recalls of thyroid medications over the year which has caused a significant amount of stress for those who suddenly had to switch medications or dosages.

This blog post is meant to keep you up to date with all three of the major thyroid medication recalls which occurred over the last 5-6 months.

Many thyroid patients know about some of the recalls because it personally affects them but you should be aware of all three.

With that in mind let's jump in:

The first recall happened on May 22nd for NP thyroid (1).

This recall was for superpotency, meaning that a handful of lots/dosages (30mg, 60mg, and 90mg tablets) contained MORE thyroid hormone than they claimed.

As I stated in a previous blog post specifically about this recall, those people who were taking more thyroid hormone probably felt better than they did previously.

But certainly, a handful of people may have experienced hyperthyroid symptoms from the slightly increased dose.

In order to be classified as "superpotent", the doses of NP thyroid must have been higher than 110% of the stated dose.

So you were really only getting an extra 10% of thyroid hormone in certain capsules.

What's important to remember here is that not ALL dosages/lots were affected.

The second recall was a much bigger deal than the first.

This recall happened on September 3rd (2) and included ALL lots and dosages of active WP Thyroid and Nature-throid medications.

If you were taking ANY dose of either of these medications then you were required to switch to a different medication altogether.

This recall was for the exact opposite reason as the first.

It was because the lots of Nature-throid and WP thyroid were considered to be "sub potent", meaning they did not have ENOUGH thyroid hormone.

If you were taking these medications then you were getting around 89% of the stated dose on the bottle.

Again, not a huge discrepancy but certainly enough to cause problems and certainly out of the therapeutic range that brands of NDT medications are required to fall within.

The last recall occurred on September 17th (3) and was again for NP thyroid.

This time, however, it was for subpotency and not superpotency and it included the 15mg and 120mg tablets.

The bottom line for NP thyroid was that they were having issues with both superpotency and subpotency on almost all dosages/lots.

What Does This Mean for NDT Going Forward?

I wouldn't be surprised if this series of recalls has some serious ramifications on the processing and regulation of NDT going forward.

One of the reasons that NDT gets a bad rap from conventional doctors like endocrinologists is because they wrongly believe that the dosing of NDT is inconsistent from batch to batch.

These sorts of recalls give them ammunition for this type of thinking and it's something that we should take a second to discuss further.

NDT brands are not classified as narrow therapeutic index drugs.

Narrow therapeutic index drugs are required to have a consistent dosage across all lots, usually within a 5% margin higher or lower than the stated dose.

Believe it or not, it's very difficult to get the dose of any medication exactly right but some prescription medications have serious consequences if the dose is either too high or too low.

To fight this problem, the narrow therapeutic index was created to ensure that pharmaceutical companies produce medications with the dosage that they claim on the bottle.

NDT medications are allowed a more broad range, a 10% margin of error higher or lower than the stated dose.

This means that technically speaking, levothyroxine is more consistent in its dosing compared to Armour thyroid, WP thyroid, Nature-throid, etc.

But the difference between these two medications is only 5% either way.

It may play an important role in certain patients and populations, but it's probably not a big deal for most people.

But now that we've had 3 recalls in a matter of a few months, it may be the case that the FDA imposes stricter regulations on the makers of various brands of NDT.

This wouldn't necessarily be a bad thing for thyroid patients and may increase the likelihood that endocrinologists may prescribe it.

How Long Will it Be Until NDT is Readily Available?

What if you were taking these medications and previously doing well on them?

What does this mean for you in terms of how long you will have to wait to get them back in active stock?

Unfortunately, when mass recalls like this happen it tends to take quite a while for the stock to be replenished and for everyone to get back on their previous doses.

These sorts of recalls tend to create large shortages in many pharmacies, especially for other brands of NDT (even those which were not directly affected by the recall).

Let's say you were doing really well on 1.5 grains of Nature-throid and you had your symptoms under control.

You are now told that you can no longer get Nature-throid so you look for an alternative.

Because NP thyroid isn't available, you have to switch to Armour thyroid.

But you aren't the only one.

There are people who were previously on NP thyroid, Nature-throid, and WP thyroid who are now suddenly all trying to switch to Armour thyroid.

This creates a huge demand for Armour thyroid and puts it at risk for going on backorder simply due to the demand.

And this also happens with various dosages of different brands of NDT as well.

Think of it like the toilet paper debacle of 2020.

Even though toiler paper companies were pumping out toiler paper like crazy, it still took them several months to actually catch up to the demand.

A similar thing may happen with other brands of NDT so be wary of that.

Unlike toilet paper, brands of NDT are not as commonly used by thyroid patients so the amount produced is not nearly as high as say levothyroxine.

This means it may be several months before we see stock of NP thyroid, WP thyroid, and Nature-throid in regular box pharmacies.

This is one reason why I always recommend that you keep an extra stock of whatever thyroid medication you are using on hand!

What Should you Use For Now?

What should you do if you have been affected by these recalls?

First of all, don't worry.

There are still many great thyroid medications and options available to you.

And, worst-case scenario, these medications will eventually make their way back to the market.

In the meantime, you can still find success with the various other thyroid medications available.

I have a list of combinations that I am recommending in 2020 due to the problems with these NDT recalls and other issues that thyroid patients have been experiencing.

Even though thyroid patients have been dealt a bad hand in 2020, you still shouldn't lose hope.

The silver lining may be that these recalls result in changes to NDT manufacturing which results in more consistent dosing and better medications for thyroid patients in the future.

The downside is that it may be more difficult to get WP thyroid, Nature-throid, and NP thyroid over the next several months.

But now I want to hear from you:

Have you personally been impacted by these recalls?

If so, how are you proceeding with your thyroid medication?

Are you changing to a combination of T4 + T3 or are you switching to Armour thyroid?

If so, how is your transition going?

Hey! I'm Westin Childs D.O. (former Osteopathic Physician). I don't practice medicine anymore and instead specialize in helping people like YOU who have thyroid problems, hormone imbalances, and weight loss resistance. I love to write and share what I've learned over the years. I also happen to formulate the best supplements on the market (well, at least in my opinion!) and I'm proud to say that over 70,000+ people have used them over the last 6 years. You can read more about my own personal health journey and why I am so passionate about what I do here.