Iodine & Hashimoto’s: Why It's Not as Harmful As you Think Skip to content

The Hashimoto's and Iodine Controversy Explained

Will iodine flare up your Hashimoto's and cause more damage to your thyroid gland or will it resolve your symptoms completely?

Well... it depends on who you ask.

If you ask me, iodine is an amazing nutrient that is incredibly beneficial to thyroid patients including those WITH Hashimoto's.

If you ask someone who has reacted negatively to iodine in the past, they will tell you a different story.

But how likely iodine is to cause problems matters a lot for this discussion.

What if only 1 out of 1,000 patients with Hashimoto's experienced problems when taking iodine.

What if that number was even higher?

Throughout my years in treating thyroid patients, I've had the opportunity to not only personally treat hundreds of patients with Hashimoto's and I've only seen only a handful of negative reactions to iodine.

I've also provided tends of thousands of thyroid patients with iodine in the form of thyroid-specific supplements and the results are the same.

Negative reactions to iodine are simply few and far in between but this doesn't stop some people from exclaiming that their own personal experience is indicative of the whole.

Today we are going to take a deep dive into iodine in the case of Hashimoto's.

Why Some Doctors Recommend Against Iodine in Hashimoto's

In addition to the occasional Hashimoto's patient who will tell you that iodine is dangerous for your thyroid, you will also run into doctors who say the same thing.

The reason that doctors recommend against Hashimoto's is a little bit different.

Years ago, there was research that showed a relationship between iodine intake and the risk of developing Hashimoto's thyroiditis (1) in some countries.

These studies showed that the more iodine that a country consumed the more cases of Hashimoto's seemed to appear in that country.

What's more, is that these two things appeared to be correlated with each other.

Meaning, as iodine consumption rose so too did the diagnoses of Hashimoto's.

And while these studies did show a correlation between iodine intake and Hashimoto's, the studies did not prove causation.

It's the classic case of correlation does not equal causation.

And most doctors who have taken a closer look at the science tend to agree that this is the case.

The rise of Hashimoto's in developed countries is more complicated than being tied just to iodine intake.

In addition, we see the rise of MANY chronic health conditions in the same countries including an increased risk in ALL autoimmune diseases.

You may be able to try and blame iodine on Hashimoto's cases but you will have a hard time linking iodine consumption to diabetes, obesity, metabolic syndrome, cancers, heart disease, and multiple sclerosis.

We do know, however, that decreased intake iodine does seem to increase your risk for developing breast cancer later in life (2).

If you avoid iodine for your thyroid you may be causing problems in your cancer risk later in life.

But there is one good thing that these studies showed.

They outlined a connection between iodine-induced thyroid gland damage and a deficiency in another important nutrient... Selenium.

Taking Selenium Mitigates the Risk for Most People

There is definitely a connection between thyroid gland damage and iodine intake but only in cases of corresponding selenium deficiency.

Selenium plays a major role in protecting your thyroid gland from your own body because it is required to produce something called glutathione.

And iodine, for all of its virtues, can cause an increase in free radicals when it is picked up by the thyroid gland.

In the healthy thyroid gland, these free radicals are neutralized by glutathione which your own thyroid gland produces from special enzymes.

But what happens when you take iodine and there isn't enough glutathione to neutralize the free radicals?

You get thyroid gland damage, inflammation, and oxidative stress.

And this sounds a lot like immune induced damage to the thyroid gland, right? That's exactly what it is and this is the connection between iodine consumption and thyroid gland damage.

But it's important to note that this damage only occurs when you are ALSO selenium deficient (3).

This is probably also why we see some studies which show that taking selenium if you have Hashimoto's, can actually reduce thyroid autoantibodies.

No doubt, there are many patients with Hashimoto's out there, and even reading this right now, which suffer from thyroid gland inflammation due to this nutrient deficiency.

But it would be silly to blame iodine on the problem when the cascade of events is as complex as mentioned above.

The bottom line is that while iodine has the potential to be harmful to some people, it's not universally harmful nor should it be treated as such.

What does it look like if you have Hashimoto's and you take iodine and you react negatively to it?

And, by the way, if this has happened to you please leave a comment below with your experience! It would be very helpful for others to see.

The reaction is actually pretty straightforward.

If it happens to you, and again this is very rare, you will trigger a cascade of events that causes thyroid gland inflammation.

This thyroid gland inflammation typically results in a dramatic rise in thyroid antibodies (such as TPO antibodies and/or thyroglobulin antibodies) as well as a dramatic change in your symptoms.

The patients that experience this will see a flare-up in their Hashimoto's symptoms almost immediately.

If they were to check their lab tests they would also see corresponding changes to thyroid lab tests including:

While this may sound scary or concerning you should be aware that the symptoms fade relatively quickly once the iodine is stopped and the chance of any long-term harm is essentially non-existent.

So even in the worst-case scenario, which is a negative reaction to the iodine you are taking, it's only temporary and incredibly rare.

The prevalence based on my own experience suggests that this type of reaction is probably in the 1 in 5,000 to 1 in 10,000 range.

How much Iodine you Take Matters... A Lot

To expand on the idea that idea causes problems we also need to include dosage into the discussion.

I mentioned above that iodine can cause problems for a select FEW patients with Hashimoto's (4), and this is true, but this reaction typically only occurs when the dose of iodine taken is sufficiently high.

In other words, whether or not you react to iodine depends less on your Hashimoto's status and more on the dose of iodine that you are taking.

And just like the topic of using iodine in Hashimoto's, how much iodine you should take is also controversial.

To put it simply:

The higher the dose of iodine that you take the more likely you are to react negatively to it.

This is true for ALL thyroid patients including those with Hashimoto's.

The RDA set for iodine is typically too low for most people, especially given the soil depletion problem we are currently dealing with.

Because of this, some patients have started to recommend incredibly high doses as they found them to be helpful in some situations.

While these higher doses can potentially be helpful, they aren't worth the risk involved for most people.

A high dose of iodine, by most standards (including my own) is anything greater than 6 mg per day.

The recommended dose of iodine that adults take is somewhere around 150-200mcg per day.

The RDA for those who are breastfeeding and pregnant is in the high 200 mcg per day range.

Some people recommend doses that are 30 to 60x higher than the RDA and that's when you can get into trouble.

But using doses in the 100-200mcg range, even in Hashimoto's is not likely to cause any issues, especially if taken with selenium.

Is iodine deficiency something that you should even worry about if you have Hashimoto's?

The answer is yes.

Hashimoto's patients, just like any normal healthy adult, should worry about iodine deficiency (5).

In fact, given the information and controversy that I've outlined here, there's even more reason to think that Hashimoto's patients are MORE at risk for iodine deficiency compared to non-thyroid patients.

You can get tested for iodine deficiency using several different methods but they are typically not very accurate or helpful (6).

A better approach is to assume that you are deficient in iodine and to trial with small doses of iodine.

Doses in the 100 to 200mcg per day range, if accompanied with selenium, pose virtually no risk to your health and may actually be very helpful.

Because humans can't produce iodine on their own, and because consumption of iodine-rich foods is not common among people who live in the US, it's actually fairly safe to assume that you are iodine deficient.

The body can store a fair amount of iodine in the body so you may not be as deficient as you think you are but remember that iodine is REQUIRED for thyroid function.

There's no getting around it.

Not enough iodine WILL result in thyroid problems.

So taking iodine isn't necessarily a treatment you use to TREAT Hashimoto's but it's a therapy that you use to PREVENT problems from occurring down the line.

In fact, I would say that most women with Hashimoto's who use iodine do not necessarily feel an improvement when taking it.

But that doesn't mean it isn't doing anything or that you should stop taking it.

You should be taking iodine to prevent problems down the line and/or to replace low iodine stores that you may experience due to iodine avoidance.

Iodine is not the harmful nutrient that you've heard so much about.

And while iodine has the potential to cause problems for some people, the population likely to be affected is so small that it shouldn't be used as a benchmark to create recommendations for other patients with Hashimoto's.

My recommendation is that all patients with Hashimoto's at least undergo a trial of iodine supplementation.

The only exception to this rule would be those people who have already had a bad experience with iodine in the past.

Have you ever tried iodine? Do you also have Hashimoto's?

What was your experience in using iodine?

What type of dose did you use? Low dose or high dose?

Did you see any improvement in your symptoms? Did you experience any negative reactions? 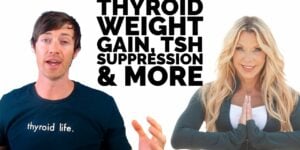