How to Lose Weight: the Interplay of Hormones and Obesity Skip to content

When treating any medical condition it is absolutely essential to understand the basic physiology or reasons why it occurs. That means you have to be asking the right questions in order to get the right answers.

When it comes to obesity conventional medicine hasn’t been asking any questions in over 40 years. If you are overweight and go to your doctor you will get the same advice: eat less and exercise more, the so-called ‘calories in, calories out’ model. The problem is this: patients have been following their advice and as a result they are more sick than they have ever been:

If we are all getting sicker and fatter despite following the advice of our doctors is it crazy to ask, do we really understand why people gain weight and become obese?

Obviously we don’t have the a solid understanding of the issue and in truth it is very complex, but it can be made easy to understand when we start asking the right questions.

What else can be causing us to become obese sicker and fatter? BESIDES eating too much and exercising too little?

We really don’t have to look far. If our fat cells are getting bigger and bigger why don’t we look at what causes them to grow or regulate them? Science and doctors already know the answer to this, if you look at any medical textbook you will find the major regulator of fat cells.

Insulin is a type of growth hormone and it makes your fat cells grow! If you ask any doctor what happens when they start someone on Insulin for diabetes (maybe you know from personal experience), they will all tell you that their patients immediately gain 10-20 pounds.

Insulin actually has many jobs as a hormone, but the primary job as it relates to fat cells is to make them grow. And it is a super fat storage hormone. Insulin causes all of the calories you eat to be laid down as fat in your body, specifically belly fat. (1)

The idea that hormones and insulin cause you to gain weight has been well established in the medical literature but for some reason it seems to stop there. Very few doctors have been applying the principle of reducing insulin to treat obesity or any of the other chronic conditions associated with insulin resistance.

It’s hard to move away from the old dogma, but let me help you understand with an analogy.

Our current understanding of weight gain looks something like this… 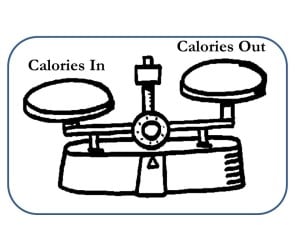 …where your weight fluctuates based off of the difference between what you consume in calories and what you spend in energy. In this model it doesn’t matter what the amount of calories you consume is, as long as you are burning more than that.

Instead of thinking of your body as a scale it’s more accurate to think of it as a thermostat. As a thermostat your weight is ‘set’ at a certain weight by your hormones (predominantly insulin, cortisol and some sex hormones).

In the thermostat analogy it’s really difficult to budge the temperature (your weight) unless you treat the underlying cause of the problem – insulin resistance. This is why it’s so difficult to lose weight by dieting or exercising. Unless you alter your insulin resistance, your body will naturally take you back to it’s preferred ‘set point’ and weight.

To really help this concept sink in lets use an example…

Imaging a scenario where you are eating two different meals that are equal in calories but differ in how they will affect your hormones.

If you are a woman it is recommended you consume between 2000-2400 calories per day to maintain a healthy weight (2). The CDC states that if you burn in excess of 3500 calories you will drop a pound of weight (3). Using the calorie in-calorie out model, and assuming you are a woman, if you consume 8 krispy kreme donuts per day you will only be eating 1520 calories of your ~2000 calorie daily limit. In this scenario you should lose 1 pound per week.

Do you really think that this diet over the course of the week will result in you losing 1 pound?

Let me explain what will really happen…

The spike in insulin level then starts a cascade of hormonal responses that turns on bad biochemistry in your body.

Insulin causes you to store those calories as belly fat, it increases overall inflammation (4) in your body, raises your triglycerides, lowers your good cholesterol (HDL) and increases your blood pressure.

It doesn’t end there…

In men, elevated levels of insulin lower testosterone (5). In women it causes excess estrogen. It may make sense now why so many men suffer from ‘Low T’ and why so many women suffer from ‘Estrogen dominance’ conditions such as PCOS, breast cancer, and decreased libido!

This increase in insulin also causes changes to your brain chemistry as well.

It increases your appetite and blocks leptin, which is your appetite control hormone. If you have sustained levels of insulin you will become leptin resistance. When this occurs you have now lost your ‘I’m full’ response. Your brain is now incapable of telling your body when you’re full. This may help you understand why people who are overweight constantly feel hungry!

In your liver this spike in insulin causes fat to deposit there (the so-called fatty liver) which results in even more inflammation. Chronic inflammation then results in more weight gain, leptin and insulin resistance, increased appetite and ultimately diabetes and obesity.

The real model of obesity is best described with the figure below:

It’s time for some change. The long recommended diet that is high in wheat and grain products inevitably leads to elevated blood sugar and poor sensitivity to insulin (6)(7)(8). As a consequence this change in insulin sensitivity has been shown to be a major cause of abdominal fat accumulation (9)(10). The most alarming part? this is a vicious self perpetuating cycle, the more abdominal fat you gain the worse your insulin sensitivity becomes – leading to more belly fat, more hormonal chaos and increased risk of heart disease and diabetes (11)(12).

When we start asking the right questions about how we get fat, while pushing aside the calorie in-calorie out model, we really can appreciate new insights for the treatment of obesity.

It’s important to point here that while insulin plays the major role in weight gain in most people, it’s not the only hormone that can cause problems.

The second major cause of excess belly fat is due to constant, low-grade chronic stress on your body. A small level of stress can be good for your body, but in large and constant amounts it can wreak havoc.

When you are stressed for ANY reason (emotionally, physically, spiritually, etc.) your body secretes a stress-coping hormone called cortisol. Unfortunately, increased cortisol levels are also directly linked to belly fat (13). It doesn’t take a lot of stress to chronically increase your cortisol levels either, this study showed that ‘normal’ stressors of life, such as subconscious worry/anxiety, busy schedules and lack of sleep are enough to cause increased cortisol (14) and thus increased belly fat.

In addition to cortisol, the sex hormones (estrogen, testosterone) as well as thyroid hormone seem to be particularly sensitive to the chaos that insulin resistance causes. These hormones are often in flux in chronic inflammatory states and they should be evaluated as well if you are obese.

Most of the time though, as you treat insulin and chronic inflammation your other hormones tend to come into balance without further medication.

Let’s do a quick recap of what we learned before we move on:

The next posts will help you understand how to lose weight by lowering your insulin levels.

1 Usui, Chiyoko et al. “Visceral fat is a strong predictor of insulin resistance regardless of cardiorespiratory fitness in non-diabetic people.” Journal of nutritional science and vitaminology 56.2 (2010): 109-116. 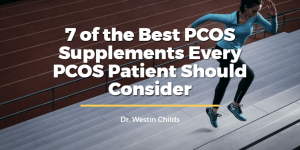