Using Fluconazole for Candida Overgrowth: What to Look Out For Skip to content 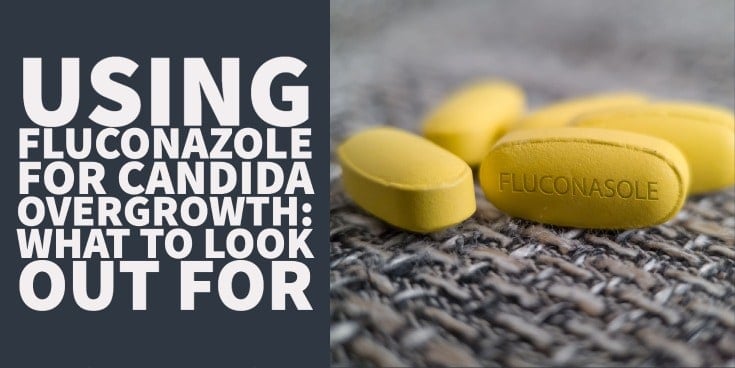 Candida overgrowth is a condition that affects many patients, especially those with existing gut problems and those with thyroid disease.

Among the many treatments available are some which require a doctor’s prescription.

In this article, we are going to focus on fluconazole (also known as Diflucan) which is a prescription medication that is particularly effective at killing the candida species.

This medication is a potentially great option for many people because it is effective and does not typically carry negative side effects.

The overgrowth of this fungus can lead to certain symptoms including fatigue (1), sinus infections (2), digestive issues (3), reduced absorption of nutrients (4), and food intolerance.

There’s obviously some controversy surrounding this condition which is apparent with some simple searches on the internet:

This controversy stems from the fact that conventional medicine believes that candida is really only a serious issue if you are severely immunocompromised.

Meanwhile, the integrative/natural community believes that candida is a common condition found in the intestinal tract of many people and which causes negative symptoms.

The truth, as always, is really somewhere in between.

My personal opinion is that candida overgrowth can certainly be an issue for some people while others may have the same level of fungus in their intestinal tract and not have any issues.

Your susceptibility to candida and its effects probably has a lot to do with your own personal genetics (5), your personal history, your immune status, your gut status, and so on.

But that’s a topic for another day:

I’m not going to get into the controversy surrounding this medical condition in this article but I at least want to point out that it exists.

I’m going to assume, for now, that you know or at least suspect that you have this condition and you are looking for treatment.

And the treatment we are going to focus on today is the prescription medication known as fluconazole.

*Note: this isn’t the only way to treat candida, though! Later we are going to discuss some natural options as well.

Fluconazole is a prescription medication, which means you need a doctor to give it to you, and it’s designed to eradicate certain fungi.

Fluconazole is typically given to people who have the manifestation of candida such as thrush or yeast infections.

The good news is that it can also be used to treat intestinal candida/fungus as well.

And, if you are someone who has or who semi-frequently suffers from conditions such as thrush or vaginal yeast infections then there is a very high probability you also have candida in your intestinal tract.

After all, where do you think the infections are coming from?

Back to fluconazole for a minute.

Basically, it helps weaken the ‘shield’ that protects fungus from outside forces.

It has shown activity (meaning it can kill) the following species:

Some species, such as Candida krusei are considered to be resistant to fluconazole and so should not be used to treat that specific strain.

Fluconazole is the generic medication while Diflucan is the name-brand. So either of these medications should work if you are attempting to treat your candida overgrowth.

One potential downside to using fluconazole is the fact that many species of candida have become resistant to its effects.

This concept also occurs with certain bacteria which have become antibiotic-resistant due to the overuse of certain antibiotics.

The same thing has occurred, at least somewhat, with fluconazole and candida (6).

Certain species of candida have become resistant to fluconazole.

As a patient, this is very important to know and understand.

Because it may impact how you feel when you start taking fluconazole.

Imagine you are taking fluconazole for candida but you aren’t feeling any better while taking it.

If this occurs, and you are sure your symptoms are at least mostly related to candida, it could be a tip-off that your species is resistant to fluconazole and that you may need a different type of therapy.

Resistance to fluconazole seems to occur on a personal level.

Meaning, the more times YOU use Diflucan or fluconazole the more resistant the strain of candida in YOUR body becomes (assuming it is not all killed off).

So even though certain species of candida are resistant to fungal medications does not mean or guarantee that the species in your body will be resistant to them.

Because of this, it’s still worthwhile to try these medications (assuming you don’t have any contraindications to using the medication).

A couple of points to remember as we talk about the side effects of prescription medications.

Prescription medications must include ALL potential side effects which have ever been reported (even once and even if they were only closely associated but not caused directly by the medication).

Have a healthy respect for side effects from medications but don’t automatically assume that they will occur.

#2. Side effects tend to be related to the DURATION of therapy and the DOSAGE you are using.

Side effects caused by medications are typically dose-related.

Fluconazole, for instance, is generally only used for a few days (sometimes up to a month), and at this level of usage, the risk for side effects is quite low.

#3. Just because you CAN get these symptoms does not mean that you will.

Major side effects are quite rare with most medications (if they weren’t then the medication would be pulled from the market).

Common side effects typically fade on their own with time.

I’m not necessarily advocating the use of fluconazole to treat Candida but I also want to be fair to the therapy.

It’s easy to jump on the back of prescriptions and convince yourself that they are always bad because of their potential for negative side effects.

But the reason we know so much about these medications is that the FDA helps keep track of them.

Nothing like that exists for dietary supplements (at least not to the same degree), so supplements probably CAN cause a variety of symptoms as well but no one is keeping track of them.

Common side effects may include:

My experience has been that most people do not experience any negative side effects when taking fluconazole.

Those who do have symptoms usually have a mild headache or an upset stomach which fades over the course of 5-7 days or so.

More serious (but less common) side effects include:

*Note: I have never seen anyone react with any of these side effects and I have used this medication probably several hundred times. It doesn’t mean that they don’t occur but they are not common.

You’ll notice that many of these serious side effects have to do with the liver.

Because of this, fluconazole should NOT be used in people who have known liver dysfunction.

It should also NOT be used if you have a known hypersensitivity to fluconazole or to other ‘azoles’.

*Note: this is not a complete list of side effects of fluconazole. I just wanted you to be aware of SOME of the more common and more serious side effects potentially associated with this medication.

For a more complete list of side effects, you can look here (7).

It may be tempting to think or believe that prescription medications are always more powerful than over-the-counter supplements.

And while this may make sense intuitively, it certainly isn’t always the case.

Some studies, such as this, have shown that herbal antibiotics/antifungals can be just as potent (if not more potent) than conventional prescription medications.

Having said that, prescription medications certainly have their place, especially when treating gut-related issues such as SIFO (candida) and SIBO.

If you prefer the ‘all-natural’ approach OR if you’ve tried Diflucan/fluconazole without success, there are still many options available to you.

I’ve compiled a list of supplements below that you may want to consider if you have candida:

These supplements can also be combined with prescription medications (such as fluconazole) to increase effectiveness and reduce the risk of fungal resistance.

When I treat patients for fungal overgrowth or candida, I typically use multiple options for that very reason.

Another important point to consider is that killing off candida is only part of the equation to treating your issue.

If you kill off candida but do not fix the issues that caused it to overpopulate in the first place then you will eventually end up where you started.

You will want to ensure that you take the proper precautions such as changing your diet (to avoid the foods that candida likes to eat and which make it grow), reducing your stress (which can weaken your immune system), and providing your body with healthy probiotics to take the place of the candida once it’s gone.

These steps are all very important to not only treating candida but also ensuring that it does NOT come back.

Candida is incredibly common, though perhaps not quite as common as you may think, and should be addressed swiftly if identified.

As a patient, you have MANY options for treatment available to you.

Fluconazole/Diflucan falls into the last group and is an effective medication for treating candida in many cases (though not all).

My recommendation is to use fluconazole in combination with other over-the-counter supplements to enhance its effectiveness.

This combination of supplements should help you kill off fungal species in your gut (and other places) and diminish the likelihood that they will come back.

Are you suffering from candida overgrowth?

Do you suspect that you have it?

Have you used fluconazole before? Did it work for you?

Why or why not?

Brazil Nuts And Your Thyroid: Helpful or Harmful?

Side Effects of Iodine Supplements: What They Mean

Iodine Allergy: Why It Doesn’t Exist & What Your Symptoms Mean

Cyanocobalamin vs Methylcobalamin: Which Version is Best?

How to Test For Inflammation (Order These 3 Tests)

Hey! I'm Westin Childs D.O. (former Osteopathic Physician). I don't practice medicine anymore and instead specialize in helping people like YOU who have thyroid problems, hormone imbalances, and weight loss resistance. I love to write and share what I've learned over the years. I also happen to formulate the best supplements on the market (well, at least in my opinion!) and I'm proud to say that over 80,000+ people have used them over the last 6 years. You can read more about my own personal health journey and why I am so passionate about what I do.

P.S. Here are 4 ways you can get more help right now:

#1. Get my free thyroid downloads, resources, and PDFs here.

Alpha Lipoic Acid (ALA) and Thyroid Health: Is it Safe to Use?

Can You Get Everything Your Thyroid Needs From Food?

Thyroid Hormone Resistance: What is it & How to Diagnose it

Do You Have to Take Thyroid Medication For Life Once You Start?

Should You Order Your Own Thyroid Lab Tests?