There are about 4.5 million people in the United States (and more in the world) with hyperthyroidism.

*This number is calculated by taking the population of the US and multiplying it by the prevalence of hyperthyroidism which is 1.2%.

A large majority of these people have undergone RAI to treat their hyperthyroidism.

A new study (1) suggests that there is a fairly strong connection between undergoing RAI and your risk of cancer as you progress through life.

We are going to explore this study and discuss what you can do if you have hyperthyroidism, if you've undergone RAI already, or if you are considering undergoing the procedure:

RAI, which stands for radioactive iodine ablation, is a procedure commonly used to treat hyperthyroidism and Graves' disease.

It's also used to treat other conditions such as toxic multinodular goiter and thyroid cancer but most people get this procedure done for hyperthyroidism.

Hyperthyroidism, as you probably know if you've had this procedure, is a condition which causes your body to produce more thyroid hormone than it should.

This excess thyroid hormone leads to conditions such as osteoporosis, heart enlargement, and other symptoms such as hair loss, fatigue, and weight loss.

You can think of hyperthyroidism as a state of heightened metabolic function where everything in your body is in overdrive.

This condition, obviously, is harmful if left untreated which is where RAI steps in.

The most common treatment for hyperthyroidism is radioactive iodine ablation.

Radioactive iodine ablation, or RAI for short, is a procedure which has been used since the 1940s to destroy the thyroid gland.

No thyroid gland = no excess thyroid hormone production, so the logic goes.

There's only one problem with this logic and that has to do with the safety of the procedure.

It was through, for probably close to 70 years, that RAI is a fairly safe procedure.

There have been some studies in that past which show a link between RAI and the development of cancer but these studies have largely been inconclusive.

A recent study, which was published on July 1st, 2019, shows that there is a fairly high risk of developing certain types of cancers later in life if you've been exposed to RAI.

Increased Cancer risk in other tissues

This study, which looked at over 18,000 people, showed a positive correlation between the dose of radiation received during RAI in various tissues and your risk of developing cancer in those tissues.

This may not sound intuitive at first so let's explain it.

First of all, the reason radioactive iodine was thought to be so safe was that most of the radiation concentrates in the thyroid gland.

This means that the higher the dose of radiation you are exposed to, the higher your risk of developing cancer becomes.

Just being exposed to radiation does not guarantee that you develop cancer though, so I don't want you to think that.

You are exposed to radiation on a daily basis by eating foods (such as Banana's (2)), when you fly in an airplane, and when you sleep by someone at night (3). 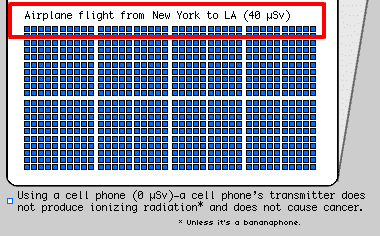 These are all low doses of radiation and, generally, are not felt to increase your risk dramatically over your lifespan.

Getting treatment with RAI is different, though, because the entire goal is to provide your body with a high dose of radiation which concentrates in the thyroid gland and destroys your thyroid gland tissue.

It turns out that while this is true, your thyroid gland may not be the only tissue in your body which takes up the radioactive iodine after it's in your body.

And these other organs, as they take up radioactive iodine, are what increases your risk of developing cancer later in life. 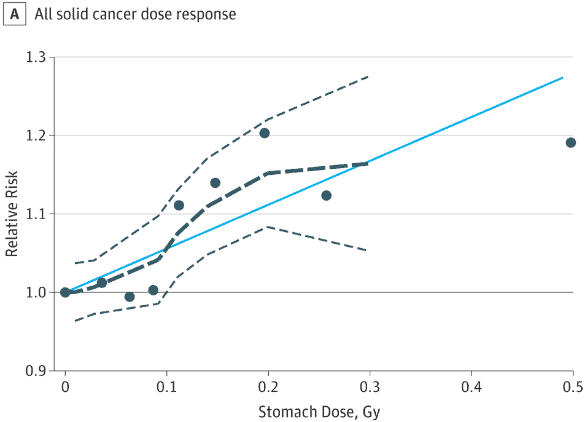 They found that as the levels of radioactive iodine increased in these organs so too did your risk of developing cancer.

Adding all of these values together they found that:

This may not seem like a lot at first glance but realize that this risk is in addition to all other risks already associated with the procedure.

The units mGy refer to "gray" or the dose of radiation that you receive.

The more times you undergo RAI the higher this dose will be in all tissues (including your thyroid, breast, and stomach tissues).

What to do if you've been exposed to RAI

As someone reading this, you may have already been exposed to RAI.

For those who have been, the damage is already done.

Unfortunately, you can't go back in time to erase the damage that has been done.

But does that mean you are helpless? Not by a long shot.

You still have the ability to monitor your risk of cancers through several types of preventative measures such as self-screening or blood testing.

In addition, you can do your very best to optimize your health in such a way which would minimize your risk of developing other conditions which also contribute to your overall cancer risk.

What conditions am I talking about?

Things like avoiding obesity (4) or losing weight if you are overweight(being overweight is associated with an increased risk of cancer), treating insulin resistance (5) (if present), avoiding (or managing) stressful events in your life (6), and optimizing your diet (7). 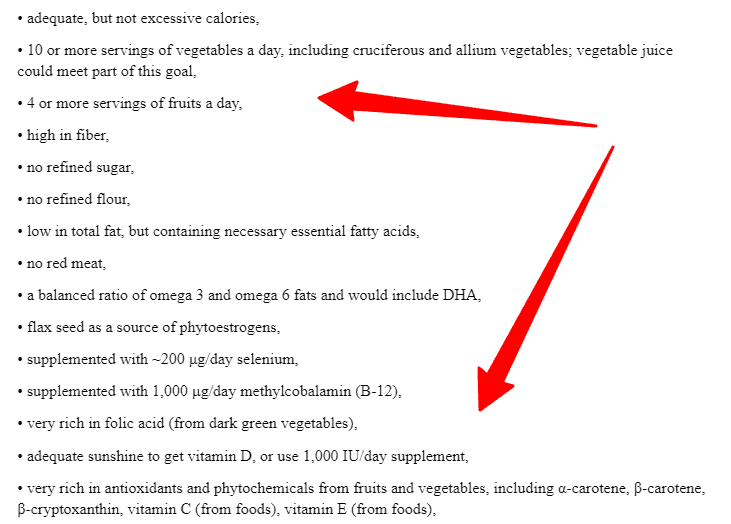 It is estimated that about 30-40% of all cancers can be prevented by adjusting your lifestyle to treat the conditions I've mentioned above.

Each one of them, in addition to other risk factors (such as radiation exposure), can impact your overall risk of developing cancer.

There may be many of you reading this, however, you have not yet undergone RAI.

Perhaps it has been recommended to you but you haven't pulled the trigger quite yet.

Perhaps you are currently taking anti-thyroid medication (such as methimazole) and you are thinking about RAI as a potential option.

Regardless of the reason, let's talk about what you can do in this position.

The main question you should be asking yourself is whether or not RAI is worth it with this increased risk in cancer afterward.

And the answer is that it really depends.

In some cases, RAI may not be negotiable.

Meaning, no matter what happens you may need to undergo RAI because you have an invasive cancer right now in your body.

Under these circumstances, it may make sense to accept a slightly higher risk of developing cancer later in your life (which is a maybe) for treating an existing and dangerous cancer which is already in your body.

But what if you are someone with Graves' disease? Do you still have to undergo RAI?

The answer is maybe and it isn't necessarily set in stone.

Graves' disease is an autoimmune disease.

And autoimmune diseases are caused by dysregulation of the immune system which may stem from treatable conditions (sometimes) such as gut imbalances, nutrient deficiencies, exposure to certain infections/toxins, and so on.

Most autoimmune diseases are treatable, at least to some degree, and may not require invasive surgeries or medications to treat.

The degree of improvement you may or may not experience when undergoing natural therapies largely depends on the cause of your autoimmune disease (which isn't always obvious).

I've discussed the therapies that may help in other articles including dietary changes, medications such as LDN, and other lifestyle interventions (mentioned above).

If both natural and conventional treatments fail to treat your hyperthyroidism then you may be stuck with a choice between getting your thyroid removed or undergoing RAI.

I think, with this information, there's a strong case to be made for getting a thyroidectomy over RAI.

Both conditions result in the complete (or near complete) destruction of your thyroid gland either because of the radioactive iodine or because of removal.

But, if your risk of cancer is reduced by having your thyroid removed, then that may be preferable to RAI.

I am hesitant to recommend surgery over a relatively non-invasive procedure, but when you look at the pros and cons of both, it may make more sense to get the thyroidectomy.

Do whatever you can in terms of your diet and lifestyle to try and prevent BOTH RAI and thyroidectomy if possible.

It's not ideal to remove your thyroid and removing or destroying your thyroid comes with many unintended side effects.

There is no question now that there is a link between RAI, radiation exposure, and your risk of developing cancer later in life.

This risk seems to increase based on how much radiation your tissues absorb.

The total risk, if your total radiation dose exceeds 100 mGy, is at least 13 new cancers cases per 1,000 patients treated.

Recommendations regarding RAI and how frequently doctors recommend it may change in the future.

It may not be preferable to undergo a thyroidectomy over RAI depending on the situation.

Have you undergone RAI?

Do you know what your radiation dose was in mGy?

Are you worried about your risk of developing cancer later?